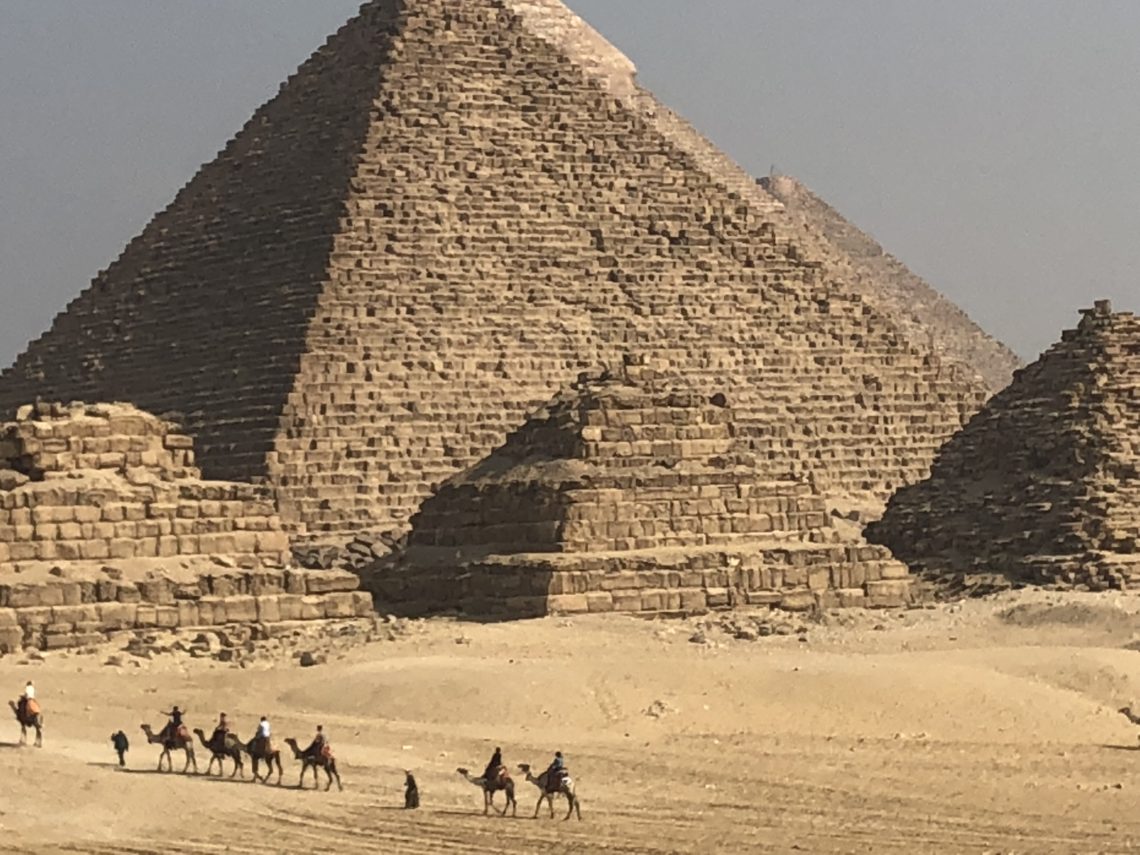 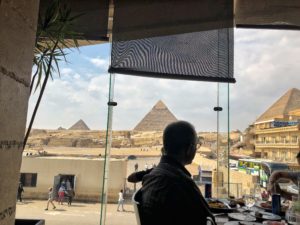 One can, these days, eat at a Pizza Hut in Giza, Egypt and look out from the restaurant’s windows towards the mighty Sphinx and Great Pyramids beyond. Though development has encroached as far as possible on these ancient Egyptian ruins (I’m grateful there’s actually a limit!) their significance as a cultural heritage site and their immense visual impact has not diminished one bit. They are still as impressive to me as they were when I first visited them 26 years ago. Perhaps even more so, as I was able to share the experience this time with my boys!

Although visits to this and other amazing ancient archeological sites in Egypt were well worth it – their power and grandeur are unequaled – it was hard to reconcile being with throngs of privileged people. Let’s face it, those who can afford to visit these and other world-renowned sites have considerably more resources than the host nationals of the countries they visit (me included). This inherent discrepancy in wealth creates all kinds of problems that spread like a contagious disease among the have-nots of the host nation. Greed amongst their governments, local municipalities, and the local population have driven uncontrolled and unsustainable development. It has precipitated unfair, discriminatory, and demeaning practices. And, it’s utterly ripe with social and economic injustices. 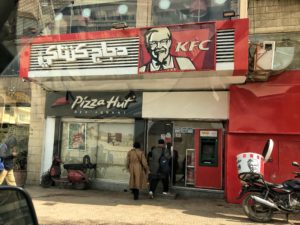 As a result of this mad dash for money, local customs and cultural norms can become diluted. People can lose all sensibilities and common decencies. Foreign cultures, their traditions, and even their languages can disappear in its wake. They prostrate themselves at the opportunity to make money and leave their moral compasses by the wayside. In the absence of any control and foresight, the tourism industry becomes the Wild West. Trial and error. No law and order. Utter chaos. Even big business – Starbucks, KFC, McDonald’s, etc. – is now in on the gold rush (did they ever have a moral compass?). Everyone is out to make a buck off the tourists, and in my opinion what was once an authentic interaction with the people and the place becomes nothing more than a mockery of itself, an amusement park, complete with snack bar, and of course, the inescapable gift shop(s).

So, this is how much of the international tourism market appears to me these days, particularly in what were once backpacker hubs, and which popularly became known as Lonely Planet haunts (before the days of the internet). Any site that is deemed worthy of a visit by the public – i.e., having generally accepted, redeeming qualities of natural beauty, or cultural or historical significance (or, maybe some other promoted curiosity) – has been, more often than not, completely exploited, and reduced to a money-making proposition. In Egypt, for example, one has no choice but to exit some of humankind’s most monumental and significant historical sites through a gauntlet of kitschy curios stalls selling stuffed camels and Cleopatra bobble heads (actually, that one’s kinda cool). 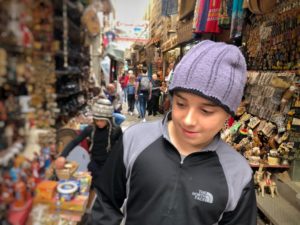 Furthermore, there is a great lack of responsibility on the part of governmental tourism departments, tourist agencies, and, of course, the tourists. The majority of tourist agencies in these places sell the exact same products and services, taking people to the exact same locations, in the exact same vehicles, doing the exact same activities. We saw this throughout our travels, along with plenty of indiscriminate tourists. The majority of agencies are extracting as much money as they can, while keeping their costs as low as possible. And they’re entirely void of social responsibility; void of environmental stewardship; void of sustainable practices; void of heart and soul. I witnessed a lot of lip-service given to these buzz-words by a vast majority of agencies around the globe. And, these agencies make a shitload of money, but none is trickling down to the local people. I’m noticeably paying a hell of a lot more for tourist-related services, food, and accommodation than I ever did. Naturally, after such time, one would expect the cost of goods and services to have risen, but in comparison to the cost of goods and services in the local economy, the prices are way out of line. After all this time, I’ve seen very little difference in the way that the majority of the local population are living in these places. They’re just as poor as they were so many years ago.

Egyptians are aggressive sellers. Similar to other places we’ve been, they do not back off very easily from their advance to sell you things. Is this behavior purely cultural? Or, are people driven to desperate measures? Driven to try to make a livelihood in a system that doesn’t support them or offer them a fair share of the pie? Their niceties wear off quickly as we start to understand that they don’t give a shit about who were are or where we come from – they just want a shot at selling us something. “La shukran” was one of our most commonly used Egyptian phrases (literally, ‘no thank you’). [Please note we met many wonderful, friendly, kind, authentic, and hospitable Egyptians. Just none that were also selling things!]

Many destinations around the globe have different prices for locals and foreigners, with prices for the latter being sometimes more than twice what a local would pay. A a fellow traveler once keenly surmised, perhaps this is payback for the western world’s prior exploitations and transgressions!

Tourism as a principal economic resource can not be dismissed. However, it’s disgusting and hard for me to accept the way things have developed. Not only in Egypt, but all over the globe, we’ve seen the detrimental effects of tourism, particularly in the places that I’ve visited again after a quarter of a century. In this day and age where information flies at hyper speed, and time and space are subsequently reduced to bits and bytes, international travel has forever been changed. No longer is it possible to easily escape the modern world and its conveniences. No longer is it easy to find novelty. Gone are the days when International travel could take you away from everything you ever knew or recognized. Gone are the days when nobody knew where you were, when there was no quick way to contact the outside world. Gone are the days when you can visit a place and find very few other travelers. The internet and its various online resources has done for tourism what travel guide books did 25 years ago, only in a hyperbolic way. It puts places on the map and renders them forever changed.

I miss the remoteness of the world.