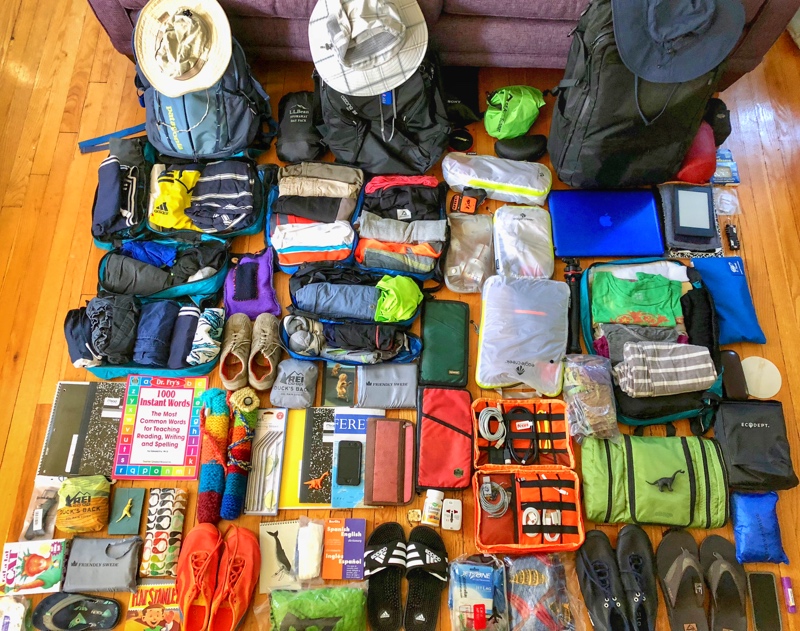 Preparation. My life has been all about it over the last 16 months. Now, as we stand on the verge of heading out on our imminent journey, the number of responsibilities is finally waning, and the space and time for relaxing into the experience is thankfully beginning to gain purchase. The planning for this adventure has amounted to the single largest collection of related responsibilities I have ever taken on in my entire life. For the past four months in particular, every moment of my time has been devoted to and consumed by thoughts, considerations, and tasks related to this trip. Each task had its own set of ancillary actions making the list extremely deep as well as wide, and required of me juggling skills and stamina well beyond anything I’d ever known – bowling balls, chain saws, tennis balls, axes, and flaming marshmallows. Take, for instance, the single task of renting out my house for an academic year, which I did, fully furnished: take photos of home, inside and out; write paragraph about the features of the home; research locations on the web for posting; respond to inquiries about the home; research and create rental agreement, and correspond with potential tenants to arrive at an executed agreement; go through every single drawer and cabinet, and every single shelf, closet, and countertop to donate, shred, store, or throw out all irrelevant, non-essential items1 – books, documents, pictures, clothes, art, keepsakes, and the like; hold spring yard sale to clear clutter, sell items on Craigslist, and donate tens of boxes of stuff to charities; change homeowner’s insurance from primary residence to landlord policy; make arrangements for mail to be forwarded; research and coordinate landscaping services for the months of our absence; organize work party with a group of friends to help prep the house for tenants (I got more done in one day than I had in the previous 10 years! Thank you everyone!); find a home for numerous house plants; and a whole lot more! Of course, this was on top of all the other responsibilities for the trip as well as my work responsibilities, financial obligations, legal matters, kids’ health and welfare, etc.

This is indeed the single largest project I’ve ever taken on in my life. And the boldest. I’ve engaged all my resources, all my conviction, all my enthusiasm, all my energy, all my intention, and all my love. At other times in my life, I made some pretty bold moves, too – breaking away from my childhood home in Framingham, MA after graduating college and driving out to southern California; riding a bicycle from San Diego to Vancouver through California, Oregon, and Washington, and back to San Diego down the Pacific coast; and deciding to quit work for the California Department of Transportation and join the Peace Corps (Lesotho ’90-‘92). All of these were indeed momentous decisions with huge positive consequences for me. They were life altering and immensely formative endeavors. But this one is big; bigger than any of the previous ones… because I’ve got kids, family, a home, a job with great responsibility, a significant relationship, an au pair, a car, and all the ostensible attachments and comforts earned, and ultimately afforded to me by virtue of my white, privileged, American life2. All these things made it harder for me to break away and to unplug from the mainstream, at least temporarily.

Interestingly enough, throughout the many months of preparation, I was often able to handle the myriad responsibilities with relative ease. Organizing and planning for this trip, on top of all the other responsibilities of my life, were enough to put me completely under at some other times in my life. But why not this time? How could I handle so many things to do – so many pieces of a gigantic puzzle – without collapsing under their astronomical weight? Often, I noticed I was able to execute effortlessly, and without noticeable anxiety. The responsibilities actually felt manageable, attainable, and, surprisingly, non-irritating. I stayed fairly balanced for the most part, which was remarkable. In the past four and a half years since Shira died, this has not been the case at all. I often collapsed under the weight of all my nominal responsibilities. In fact, I wondered if I was having nervous breakdowns during that span. My life was often too much for me; everything was a nuisance and a bother. From the receipt of an email to taking care of the boys, I was disturbed, overloaded, and in a constant state of stress. These were intensely difficult times. I was absolutely smothered by something much larger and frightening than I had ever faced. And, I had no way of understanding it because I didn’t even know what it was. It was indefinable, unimaginable, untenable, unfriendly, unbelievable, interminable, and so utterly powerful that I was only trying to keep from getting suffocated by it.

In my loss was the incessant competition between diving into darkness and my attempts to rise above it. The lure of holding onto the sadness and habitual tendencies that were no longer relevant and appropriate was incredibly strong – strong enough to make the light practically blinding. The dark was attractive not because it was dark, but because the light was so excruciatingly bright that it hurt to look at it. I could not see joy. I could not claim my happiness. I had no right to it anymore as if claiming it would discredit Shira’s death. I equated letting go of the grief to letting go of the memory of her. The darkness was familiar, comforting, and incredibly alluring for someone like me who thrived on the attention and care it brought with it. Whether I wanted it or not, I was cast into a turbulence that had turned me inside out and challenged me to choose between going forward or staying back.

In time, I became aware that part of what was holding me down in grief was my perspective on being left as a single father with responsibilities I had never asked for and certainly never wanted. I signed up for having a family with a partner and sharing in the experience together. That’s the way it was supposed to go, right? I could not let go of that notion, and subconsciously held onto it as tightly as I could even as it was being ripped out of my hands. I became very resentful and couldn’t admit it. Out of my anger about being left by Shira to raise the boys alone, I could not accept my circumstances. In my righteous indignation, the tasks of single parenting burdened me like the rock of Sisyphus. This was my lot in life from which there was no escape.

Trying to move ahead in my life after Shira died was an incredibly arduous endeavor that required an unwavering commitment to life and love. My life force was, gratefully, just enough to get me out of bed each day and go at it again. Perhaps I’m one of the lucky ones. Or, perhaps there’s no luck involved. Either way, since her passing, I have moved over the sharp, rough edges of grief towards the praise for life that exists just beyond them. And my boys have been witness to my fortitude, resilience, and strength. They have followed me on this path through the darkness and into the light. In doing so, they have had to put their trust and faith in me so that I could have faith and trust in something much larger. I know there is great responsibility in this. I am driven forward with unbridled enthusiasm that allows me to stand on the verge of something absolutely enormous.

Further, I believe that the resolute boldness of this act has provided me with countless moments of grace and ease, and has provided me with the energy and verve to forge ahead. The statement that …boldness has genius, power, and magic in it3 has really struck me these past months through the lengthy preparations. The decision was deeply rooted in the spiritual and built on a foundation of love. And through it, all my senses have been turned on – I listen with new ears; I see with new eyes; I touch the sensuality of it; I smell its fragrant beauty; and I taste its tender essence. I am alive in the boldness. That’s its magic, its genius. It has released the life force in me that was so stifled by my loss. It has rejuvenated my desire to turn towards the light. Grief is transforming to joy, to love, and to life. My hope is that my boys will experience the same jolt.

We embark on this experience with open arms, open minds, and open hearts. We’ve already been moved by this vehicle and taken to places in ourselves we’ve never been. There’s no getting off now. The train has already left the station. And, I believe it’s bound for glory.

1 What I determined to be irrelevant and non-essential is likely to be explained in a future blog post.

2Let me take this opportunity to say that I acknowledge my fortune in being able to even contemplate such a venture. My class, my race, my citizenship, my gender, at the least, have given me a status and place in my life where it is possible. I’m so grateful.

3 The quote, below in its entirety, has sometimes been attributed to Johann Wolfgang von Goethe, but may actually be by William Hutchinson Murray (1913-1996), from his 1951 book entitled The Scottish Himalayan Expedition. Murray’s book (J.M. Dent & Sons Ltd, London, 1951) details the first Scottish expedition in 1950 to the Kumaon range in the Himalayas, between Tibet and western Nepal. The expedition, led by Murray, attempted nine mountains and climbed five, in over 450 miles of mountainous travel. The book is out of print.

“Until one is committed, there is hesitancy, the chance to draw back. Concerning all acts of initiative (and creation), there is one elementary truth, the ignorance of which kills countless ideas and splendid plans: that the moment one definitely commits oneself, then Providence moves too. All sorts of things occur to help one that would never otherwise have occurred. A whole stream of events issues from the decision, raising in one’s favor all manner of unforeseen incidents and meetings and material assistance, which no man could have dreamed would have come his way. Whatever you can do, or dream you can do, begin it. Boldness has genius, power, and magic in it. Begin it now.” 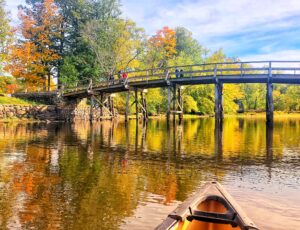 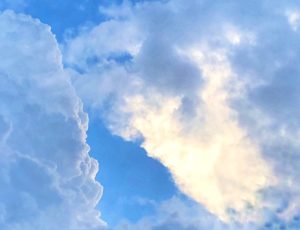