This part of the world is, and always has been, at the nexus of cultures, where east meets west. Bridging two continents – Europe and Asia – Turkey has many aspects of both; some more obvious than others. Our travels throughout this beautiful country provided us with many amazing examples of each culture’s characteristics. Often times, we discovered the exact middle, where east meets west.

Take for example, facial hair in men. In Asia, men are, by and large, hairless – perhaps a consequence of evolutionary adaptations to hot, humid climates. Hence, it’s not very common to find men with a significant amount of facial hair. In the west, we’re quite the opposite – braced against the cold, dark winters with bodies full of hair and bushy beards. In Turkey, we land somewhere in the middle (of the face) with the moustache. At least in North America, the moustache seems to have had its day. Perhaps it’s in back in vogue, in certain circles, but it seems to me that when something is refreshed back into the hip category, much, if not all, of its value is owed to its retro-active status, which is to say that the only original thing about it is that it now exists in a future context. The Turkish ‘stache, however, has never gone out of style. And, these are no ordinary moustaches – thick dark, black hairs all standing parallel to each other, pointing down towards the top lip; the kind that would hold up a nose if it fell off a face. Perhaps it has to do with the landscape between the Turkish nose and their top lips. I’ll let others expand on that topic.

Further examples of the intersection of east and west can be found in related aspects of the toileting experience. As for hardware, in the Far East, the squat toilet is the norm. In the western world, you’d be hard-pressed to find a squat toilet – rather, the porcelain toilet with seat and water-flushed bowl is the dominant fixture. In Turkey, it’s not uncommon to find both fixtures in a wash closet. It’s also notable that in the east, toilet paper is not a staple of the bathroom. Squat toilets have nearby water faucets with a bucket to be used for washing and flushing. In the west, as we all know, we’d likely panic if the bathroom toilet paper dispenser were empty. In short, Turkey gives one the widest selection of toileting options anywhere in the world – squat toilet, or seated toilet with water-flush bowl, or seated toilets with built-in bidet showers, fragrant toilet paper, or unscented toilet paper. Fantastic! 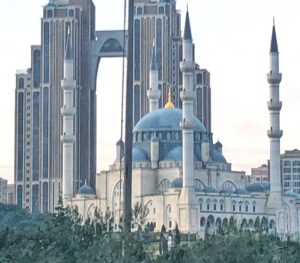 Upon arrival in Istanbul, or anywhere else in the country for that matter, the cultural contrasts of east and west are abundant. From architectural details to the climate, from attitudes about work and play, to family and community values, contrasting aspects of eastern and western cultures collide, sometimes forming a modern rendition tinted with traditional colors and styles. You can find remnants of ancient civilizations close to metropolitan cities, contemporary architecture with a hint of the past, donkey-drawn carts running alongside modern transportation systems, European styles of dress with traditional flavors, and contemporary beats on top of folk music. 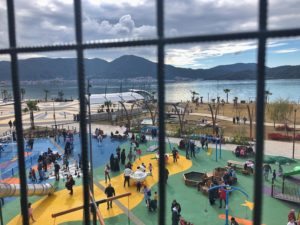 Turkey has grown immensely in the last quarter-century, and continues to this day as it stretches towards European sensibilities and influences while attached to its ancient connections. There is a booming economy and an expanding middle class as evidenced by new infrastructure, and urban and suburban development. There is a hip, modern young vibrant sector of the population establishing their cultural identity through dress and style, music, and modern conveniences. New cars, suburban housing developments, bicycle and jogging paths, new playgrounds, and sports fields are springing up all over the cities we visited (from Antalya to Izmir).

We were also acutely aware of the number of people smoking cigarettes and eating gobs of sunflower seeds. These two particular oral fixations seem deeply cultural, perhaps a cultural affect borne out of the pressures of a modern, industrial lifestyle. Discarded shells can be found in heaps all around urban, public spaces, especially parks. Folks nibble at them ferociously, like squirrels getting ready for winter. We marveled at the Turks’ agility and ease to remove the shell from the seed with nothing more than their tongue, lips, and teeth. And all for a tiny little morsel of a reward. 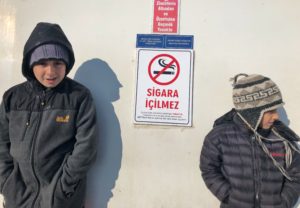 Smoking, though quite a bit more expensive and unhealthy than the seed fixation, is absolutely acceptable and all too common. However, there appears to be some national effort towards changing this. Cigarette packages have large warning labels with graphic images of charred lungs and other revolting effects of the lethal habit. The government has made it illegal – with fines – to smoke in many establishments around the country. However, nobody pays any attention to the posted signs and warnings, nor are they enforced. As an American living through an era when attitudes towards smoking transitioned from commonly acceptable and fashionable, to disgusting and dangerous, it was like a blast from the past. It was really challenging for us to be around so much cigarette smoke. I can’t imagine that health issues related to smoking aren’t burgeoning the Turkish healthcare system. I imagine the highly disproportionate number of eczanes (pharmacies) around the country has something to do with the overall health of the nation.

Lastly, I have to comment on the Turkish sales technique. Whether it’s selling cheap T-shirts or fine, silk carpets, Turks have an exceptional ability to make people buy things they don’t want or need! What’s the expression, “Sell a ketchup popsicle to a person in white gloves?” I admire the sincerity and confidence in their approach. They know their products and services so well that they minimize any chance of the potential buyer deterring the sale by arguing the finer points. It’s truly impressive, but for me, runs like the following script:

–Step 2: Now that contact has been made and the potential buyer is engaged, offer to show them your products for sale, e.g., “Come to my shop. I show you beautiful Turkish carpets.”

–Step 2A: [OPTIONAL] Seller can add, “…there’s no obligation to buy anything. I just want to show you.”

–Step 4: Show product/service and highlight and expand on the advantages, benefits, and uniqueness of what you have to offer. Demonstrate utter confidence in what you have to sell; ask the buyer how they like it and what they think of it; put the buyer deeper into the sales pocket, making it harder and harder to refuse.

–Step 5: Do not back off from the sale. If necessary, lower the price to make it harder for the buyer to refuse.

–Step 6: Continue to negotiate as necessary until sale is reached

We got really good at controlling the script and never allowing the seller to move past step 2. That is, sometimes, we’d either never engage in Step 1 – walking past without making eye contact or saying anything in response – or we’d say hello and answer the introductory questions, but politely refuse to enter the store (or follow the seller to their store). The challenge in this affair was that it became difficult to trust that anyone wanted anything other than to sell us something. What’s the use of entering into small talk if we have no intention of buying anything and the seller has only intentions to sell? We don’t like to be mean, rather, we prefer to be friendly. Ignoring our fellow human beings feels awful, so skipping Step 1 was difficult, as if we were remiss in our brotherly duties to connect with those around us. But avoiding Step 2 could be worse, especially when the seller doesn’t back down from trying to draw you in. I will say that sales techniques in Turkey aren’t really that annoying, compared, to say Egypt, where there might be more desperation in the seller’s intention to sell (due to economics), and thus their motivation to pursue a potential buyer is much higher. At least in Turkey, most sellers will back away after one, maybe two tries, to lure you in. What made it easy for us is that we have a clear intention not to buy anything. We just don’t have the room for more stuff; we’re traveling light.